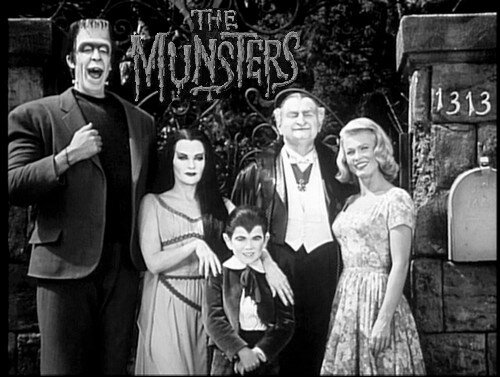 Wow, good news today for my fellow horror geeks! Entertainment Weekly has announced that Bryan Fuller, the genius behind the short-lived television series Pushing Daisies, is developing a modern-day remake of the classic TV-series, The Munsters.

That’s not all! The big rumor going around is that GeekPeeks favorite, Guillermo Del Toro, is playing a role in the reboot. This isn’t that big of a surprise after he recently announced that he was going to play a key role in developing various television projects.

Before anyone get’s their panties in a bunch about Hollywood remaking another classic TV series, keep in mind that Fuller and Del Toro are no strangers to the horror/comedy genre. Anyone who’s seen Pushing Daisies or the Hellboy films knows that these two guys know how to be creepy while still keeping it light and funny. As a big fan of the original series, I have to admit that I’m a little skeptical, but knowing these two guys are involved puts me at ease. Thoughts???

about 4 days ago - No comments

Dreamworks has announced its plans to adapt Rodrigo Blaas’ incredibly creepy animated short “Alma“ into a feature-length film. Additionally, Guillermo Del Toro has been attached to produce the adaptation. For those of you who haven’t seen the short, you can check it out below. “Alma” is about a young girl who, while on a walk

Latino Review has just reported that the genius behind The Strain Trilogy, Guillermo Del Toro, has been offered the chance to helm Legendary Pictures’ upcoming Godzilla remake… sort of. What he has really been offered is the chance to develop their sci-fi project, Pacific Rim. Here’s a description of the film: “Set in a future in

The folks over at Deadline were lucky enough to get a chance to speak with Guillermo Del Toro recently at the Toronto International Film Festival. Del Toro, who has recently announced his plans to adapt H.P. Lovecraft’s At The Mountain of Madness, spoke in great detail about the chance to work with James Cameron, what

This is an incredibly sad day for geeks everywhere! In a recent interview with MTV, Geek Peeks favorite Guillermo Del Toro discussed his future projects, including the possibility of a third installment in the Hellboy franchise. Here’s what Del Toro had to say. “I would love to do it,” said Del Toro, “But the heartbreak