New images of Chris Evans and company have appeared depicting what they look like in Captain America, costume and tone. Along with that is an article in Entertainment Weekly talking about the process in which Evans was chosen as Steve Rogers and how Director Joe Johnston envisioned the film. As a person who reads the comics I will breakdown the images, hopefully I’m not too annoying with this. 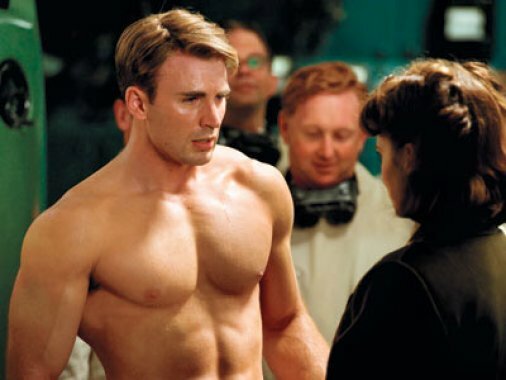 Here is Evans buffed up in a scene which takes place after he gets the Super Soldier Serum. It shows how hard he worked to get the body of a physically perfect human.

I really like this photo because the costume was very much inspired by the look Bryan Hitch came up with for The Ultimates, a retelling of The Avengers written by Mark Millar. The design he came up with was a realistic military outfit Cap would wear, with no wings. The helmet with goggles has the perfect touch that it makes me giggle with anticipation.

This made me go “Holy Crap!” because its the first time we have seen the triangular shield Cap uses before the disk-shaped one. Cap used the triangle-shaped one on missions before having it replaced, and he carries it on his back. Awesome, just awesome.

Project: Rebirth, the experiment that turns a skinny Steve Rogers to Captain America. The big lab, the lone pod which will hold Rogers, there have been different variations of this experiment, this seems very believable to me. Either way this is cool, I really like the old tech in the background.

The Red Skull and Arnim Zola! Hugo Weaving (left) and Toby Jones (right) play key villains that have a long history in the comics. I’m glad there is no photo of Weaving donning the red skull because I think that would be more powerful in the trailer/film. I love that you can see the HYDRA patch there on his arm. As for Arnim Zola, this is the first I have seen him as a human and not a mind in a robot body.

Hayley Atwell (left) plays Major Peggy Carter. Cap’s love interest in film and if I recall, in the comics as well? I ask my fellow geeks to help me out with that. Interesting tidbit, there is a Sharon Carter that Rogers is in a relationship with in the comics currently, again I ask my fellow geeks to confirm whether she is her granddaughter or not.

HYDRA! Goons of the Red Skull. Cut off one head and two more will take its place. An organization that still causes trouble. Fancy bikes also.

HYDRA submarine, inside the killer of Dr. Erskine, sole creator of the Super Soldier Serum.

Stoic and wearing the updated costume, Chris Evans sells it as Steve Rogers for me. I had my doubts, but from the look of these photos, the direction they are going, I can say those doubts are gone. I like the tone they have set up. Hell, I can even look past the dirty blond hair Evans is wearing because at the end of the day it’s not about little details like that, it’s about the characters and story. I am looking forward to this film and the time when faced with overwhelming odds Evans raises his shield and yells out those famous words, “AVENGERS ASSEMBLE!”

about 1 month ago - 3 comments

Today we bring you some photos of Chris Evans and Steve Rogers on the set of “Captain America: The First Avenger”, currently filming in Manchester England. We can see that Evans has worked out to reach the body Rogers has in the comics. His hair not being blonde is odd but Evans didn’t dye his

Fun news to report today, The Daily Mail has released photos from the set of the upcoming Captain America film, starring Chris Evans. Interestingly the man in the costume is not Evans but a stunt performer. The scene shown here is a motorcycle chase between Captain America and H.Y.D.R.A. agents. The first two show the

Yes, you are reading my title correctly, the creator of Sin City and writer of some of the best Batman comics, Frank Miller, directed a Gucci Guilty advertisement. The ad stars Captain America himself, Chris Evans and True Blood’s Evan Rachel Wood. It also features an awesome cover of Depeche Mode’s “Strange Love” performed by