A Day in Cosplay: BlizzCon 2010 Edition

I wanted to do something new to me and get in on the fun of all the BlizzCon 2010 cosplayers. World of Warcraft is my gaming drug of choice, so picking a character to emulate from that universe seemed natural. Feeling saucy, I set my sights on my favorite minion, the warlock’s succubus. I started working on my costume in my spare time about a month before the convention. Making everything from scratch took longer than I had anticipated. Before I knew it BlizzCon was a day a way! Too bad I didn’t get to make those coven hooves.

The morning of, I wandered along the crowded line looking for either my way in to my group or to our very own editor in chief himself. I posed for pictures for people as I tried to send a text out to my friends. After a good half hour of getting stopped while I tried to get to the group, I found my way into the line. I climbed over the barricade with the help of some kind people that had been snapping pictures of me. Once inside, the Direct TV crew interviewed me, which was one of the many new experiences for me that day. 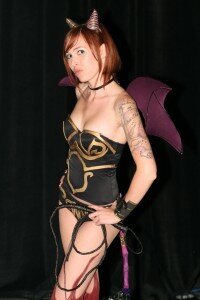 Getting from panel to tournament to game-play proved to be a bit of a challenge. Proceeding a Starcraft 2 tournament, I tried to walk the short distance to a bathroom and suddenly found myself in the middle of a very large crowd photographing myself and very lovely girl dressed as a Feral Night Elf Druid (Not my faction but I thought she was awesome none the less!). It was like a nerdy version of a red carpet photo shoot. Not only did I take pictures with guys, girls and fellow cosplayers, but a lawn gnome too! I prepared for a decent amount of attention but did not expect to be as popular as I was. I mean, did they see the Starcraft ghost costume? Maybe I had bitten off more than I could chew, dressed in as little as I was. I am a t-shirt and jeans type of gal after all. However, after reflecting on it, I would do it again any day. I was surprisingly comfortable in my succubus skin and had fun playing the part of a succubus for a day. No one creeped me out or acted inappropriately. My fellow gamers were quite polite. Perhaps they knew better than to offend a chick with a whip.

My BlizzCon experience was amazing and was enhanced by the cosplay. I plan on dressing up for next year, so if you have any Blizzard related ideas let me know!