News for the TV show Smallville. 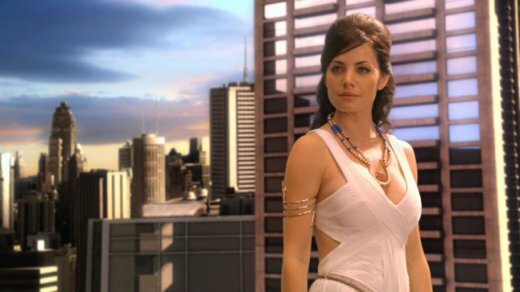 END_OF_DOCUMENT_TOKEN_TO_BE_REPLACED

A hero is made in the moment, not from questioning the past or fearing what’s to come. In this episode of “Smallville,” James Marsters returns as Brainiac; not as a villain but as Brainiac 5 from the 31st century and a member of the Legion of Super-heroes. Brainiac’s purpose is to help Clark get on the hero’s path Jor-El envisioned by showing him the past and taking him into the future.

This episode tugs at the heartstrings of any long time “Smallville” fan. We see what has become of The Torch and The Wall of Weird. During the festivities, Brainiac 5 and Clark travel through time, visiting certain points in Clark’s past. END_OF_DOCUMENT_TOKEN_TO_BE_REPLACED

Posted by Adam in Smallville

Check out the trailer for the October 22nd episode of Smallville entitled, “Isis”. The episode features Lois Lane being possessed by an ancient Egyptian goddess and running a muck around Metropolis. Thoughts?

As the title states, Supergirl, aka Kara Zor-El aka Laura Vandervoort, returns to Smallville and she has a mission. She must make herself public and stop the dark force that is floating around Metropolis in the form of Gordon Godfrey, who is possessed and rallies the people through radio and books against the heroes who work in secret, in order to create doubt and fear so as to lose the hope people have invested in them. When he threatens to expose Oliver Queen as Green Arrow, Lois goes to great lengths to stop him from doing it. When he threatens to kill her, Kara and Clark confront him, and Kara manages to repel the dark force from Godfrey. END_OF_DOCUMENT_TOKEN_TO_BE_REPLACED

Battlestar Galactica fans set your DVRs or TiVos for the ninth episode of “Smallville” set to air on November 19 Entitled “Patriot”. This episode will introduce mercenary Slade “Deathstroke” Wilson played by none other than Michael Hogan, Colonel Saul Tigh from Battlestar Galactica. Known as Deathstroke the Terminator in the comics, he underwent an army experiment that granted him with enhance reflexes, senses, and the strength of ten men. Known as the worlds greatest mercenary he eventually becomes archenemy to the Teen Titans. It should be noted that his look consist of white hair and an eye patch over his right eye which he lost to a bullet. I can’t help but smile at this but its not known if Hogan will don another patch again. Tune in and see.

With “Shield,” we are introduced to a new Cat Grant and Deadshot, Lois meets Hawkman and The Suicide Squad make a move. END_OF_DOCUMENT_TOKEN_TO_BE_REPLACED