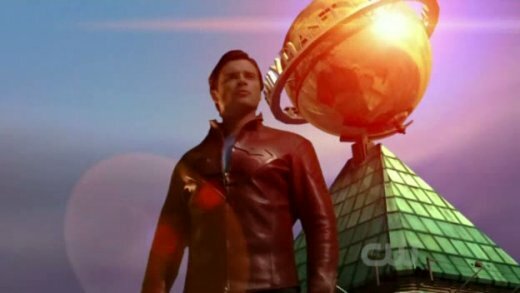 With “Shield,” we are introduced to a new Cat Grant and Deadshot, Lois meets Hawkman and The Suicide Squad make a move.

The episode takes us to Africa, where Lois is looking for Perry White but runs into Carter Hall at an archeological dig. Carter, played by SG1′s Michael Shanks, is Hawkman, and was asked by Clark to keep an eye on Lois so that she remains safe. Lois unloads her thoughts about Clark and the hero he can be to Hall, prompting him to reveal he knows about Clark and proceeds to tell her about the story of Isis and the Sun God Ra, that they were star-crossed lovers. This conversation leads to talk about destiny, how Lois can be the one to help Clark become the hero he can be, that it requires strength. The final scene between these two induces chills: Carter tells Lois he intends to embrace his own destiny as a hero, discussing how Nietzsche stated to live for the present, not the future. A person who would embrace the life they were given and make it better was an “Übermensch,” and Lois states, a “Superman.”

While this is going on, Deadshot, a man with impossible accuracy when it comes to assassinations, is hired to go after what seems to be a new Cat Grant, Clark’s new partner at the Daily Planet. She has some conservative ideals when it comes to the vigilantes that are supported by a radio personality, Gordon Godfrey. The twist is that her real name is Mary Louise Shroger and she is hiding from her child’s father. As the Deadshot continues after her she expresses her frustrations to Clark, who points out she has more in common with the vigilantes than she thought. With Tess’ help, Clark discovers Deadshot is actually after Clark, not Cat. In the final confrontation, Clark stops him but not before he gets a shot off at Cat. Clark blocks the bullet, which leaves an impression of a death head in his skin. He takes the bullet and places it on the bullet proof vest Cat had on. When she talks to Clark she mentions she doesn’t need a hero in the shadows when Clark is one who is not in hiding, that perhaps the vigilantes should step into the light.

Oliver is looking for any leads on Chloe and in his search he comes across Cat, who accuses him of torture at an old brewer. When he goes there he finds the man who tortured him, Rick Flagg, head of the Suicide Squad, a group of people who work covertly within the government to keep the heroes in hiding. In fact, the death head on Clark and the one left on Carter when he splashed water on his face are a means to track them. Flagg informs Oliver that Chloe died during her torture session, which later turns out to be false. Flagg offers Oliver membership to the Suicide Squad, but he declines. When Oliver and Clark talk about the new revelation with Chloe they both agree that something has to change; they both lost too much.

Shield has two meanings here: a number of people protecting in the name of what they believe is good, and the other is the last shot of Clark. Taking Cat’s words of how there should be a hero who is not afraid of the light he decides to use his old colors again, red and blue, leaving the black outfit he used behind. This time its a prototype version, a red leather jacket with the “S” shield on it, separated by a zipper with a blue shirt underneath. Hair slicked back he stands on top of the Daily Planet, one step closer. Overall a good episode with more nods toward the comics.

I personally look forward to the development of Rick Flagg and the Suicide Squad.