The vampires are back and it looks like a killer return. Dean gets turned into vampire and he looks fierce but that’s not even the best part. Supernatural is doing another one of it’s great meta episodes – e.g. ’The monster at the end of the book’, ‘Changing Channels’ -, this time the topic is not TV shows or Supernatural and its fans but it’s all about vampire shows and movies. The most obvious candidate is of course, ‘Twilight’. The title ‘Live Long or Twi-hard’ alone promises some hilarious jokes from Dean. Let’s hope the writers were able to throw in a couple of Buffy, True Blood and Vampire Diaries references as well.

The official CW description of episode 6.05 Live Free or Twihard

After a group of young girls go missing, Sam (Jared Padalecki) and Dean (Jensen Ackles) realize that a group of vampires have taken up residence in the small town. After a fight with two of the blood-suckers, Dean is bitten and turns into a vampire. Samuel (guest star Mitch Pileggi) tells Dean he can change him back but he’d have to get the blood of the vampire who turned him. Dean infiltrates the nest and runs into the Alpha. Jan Eliasburg directed the episode written by Brett Matthews.

And as a special bonus – My favorite Supernatural/Twilight crossover: 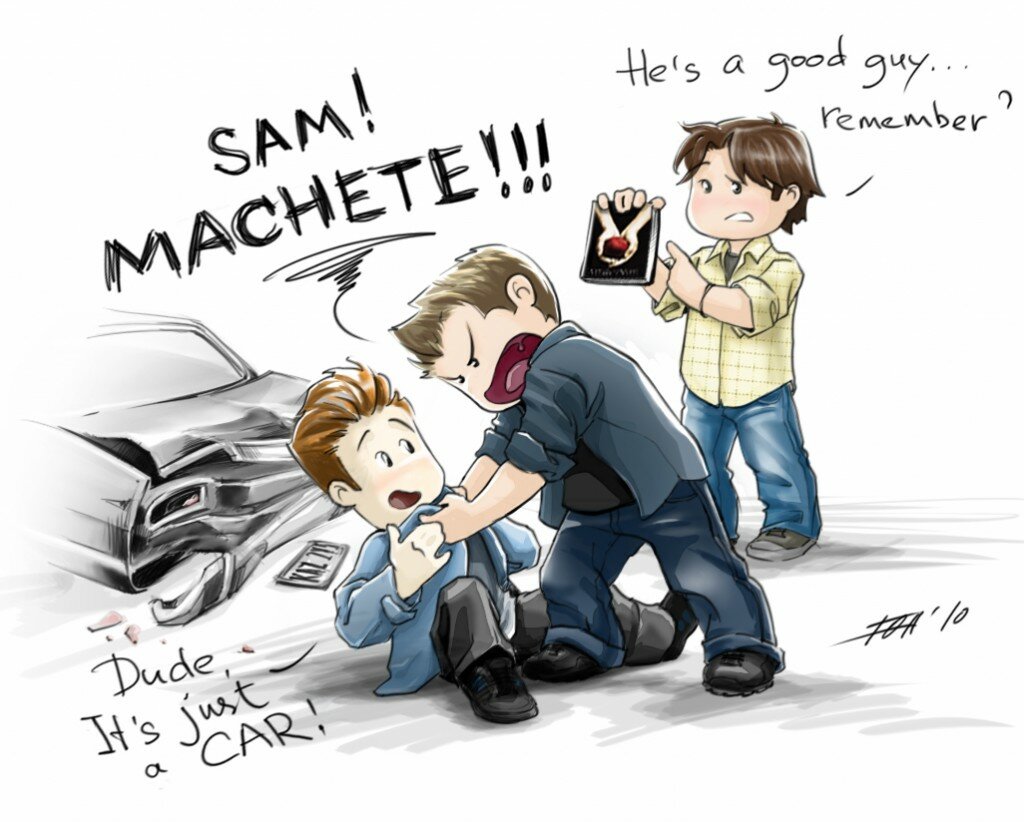 about 5 days ago - No comments

After last week’s disappointing angel episode, ‘Weekend at Bobby’s’ was back on track with season six’s theme of a different Supernatural. The episode played with expectations. In previous years, the writers usually chose the more direct and non-subtle approach in storytelling.  They would have spoiled Bobby’s plan very early on by not bothering to hide what he

Over the years, Supernatural had many awesome directors, the most influential being Kim Manners who passed away in season 4.  Of course, there were also extraordinary directors like David Nutter, Robert Singer, Phil Sgriccia, Charles Beeson, Steve Boyum and many others. In every season there are also one or two Supernatural newbies who might return the next season

The last two episodes showed a different side of Supernatural, Sam with the Campbells and Dean with Lisa. They didn’t go into this direction before so I was intrigued by it. The addition of a little mystery about the monsters and grandpa Campbell was interesting as well but ‘The Third Man’ simply wasn’t. In season 6, every

After last week’s episode brought back the comedy to Supernatural and most importantly – The Impala. It’s time for another return. It’s not Bobby, we already saw him in episode one, or another Campbell cousin, I got enough of that family. Let’s pray and hope somebody in a trenchcoat shows up. The CW trailer The

Supernatural: 6.02 Two and a Half Men Review – The Return of the Impala!

Episode II: Sam continues to act like an ice block and Dean is still part soccer mum but the good news is that the Impala is back. Fanboys and their “hell yes’” join fangirls and their “squees,” it’s a great day for all Supernatural fans! The tarp is finally gone and the metallicar is free

After all the drama of last week’s season six premiere, ‘Beautiful Loser’ is still stuck into my head, episode 2 is up. If we trust the title ’Two and a Half Men’ it’s obviously comedy time. But because this is Supernatural and not some show on CBS I’m sure there will be plenty of gore and blood as always. The

It felt like a typical episode of Supernatural but at the same time it didn’t. The most obvious change? No AC/DC at the beginning.  I know I was shocked too! Is it time for the apocalypse again? I thought we were done with that storyline. Just kidding. On the other hand, Supernatural’s writers were

It’s only a few days until Supernatural returns on Friday Sept. 24th and I can’t wait to find out what changes and story lines the writers have in store for us. If you are still not sure that Season 6 is such a good idea then watch the following trailers, maybe that will get you

If you have never watched a single episode of “Supernatural” and want to give it a try, I got good news. Friday, Sept. 24 is the perfect time to do so. The upcoming season is the opening of a new chapter and great for new viewers. You may stop reading and watch all five seasons

Supernatural fans, the end is coming! At least that what this trailer says. Check out the latest promo for Supernatural‘s 6th season premiering Wednesday September 29 on the CW.