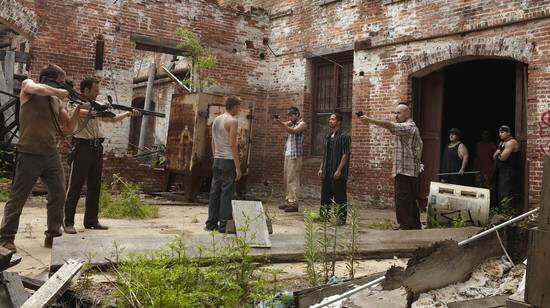 Once again the pace is picked up and we meet another group of survivors that come with a twist not even my well informed readers of the comics could foresee. Written by series creator Robert Kirkman, The Walking Dead episode “Vatos”, continues with the group of four looking for Merle, Daryl’s brother and the bag of guns.

Discovering Merle cut his own hand off and cauterizing the wound they decide to get the bag of guns inn order to protect themselves. Glenn comes up with a smart plan, which makes sense when he states he delivered pizza before. They were somewhat successful until they come across a group of gangbangers who also want the guns. In the scuffle Glenn is taken from the group in an attempt to get the guns from Rick.

There was a nice twist when Rick discovers they are not a gang at all but another group that have taken it upon themselves to protect a group of elderly people left behind in a hospital. The best scene was when Rick’s group and the other were ready to kill each other and a grandmother of one of the guys walks up to tell him another man needed his asthma medicine. Any preconceived notions I might have had were gone when the leader, G, tells Rick they are doing what they can to protect everyone. Here we see what can be Rick’s strength and/or weakness. He gives half the guns to the group, he seems to be the moral compass so far in the show. They return to their van, gone, taken by Merle and scared at what he might do when he gets back.

In the camp there is fish to be eaten when walkers arrive and kill a number of people. Shane does what he can, Rick and the others arrive and they all blast away with their shotguns. When it’s over there are a number of the group dead, Andrea, played by Laurie Holden, is crying over her dead sisters body. Something I didn’t like because of the blood being infected and all logic gone but I can look past that. It was a very good episode, demonstrating both the suspense and the relationships between the survivors.